I made it a point to do some cycling during my two weeks in Switzerland and one of my favourite routes was Alta Verzasca Bike, in the upper Verzasca Valley.

Cycling in the Verzasca Valley was the perfect way to experience the natural beauty and traditional architecture that makes the Ticino canton such a wonderful region to visit. Rural villages, stone houses, forested mountains, quiet pastures, and an emerald green river fill the valley with charm and character.

The scenery was inviting enough to convince me, a person who loves biking fast, to slow down and savour the journey, instead of racing to my destination. 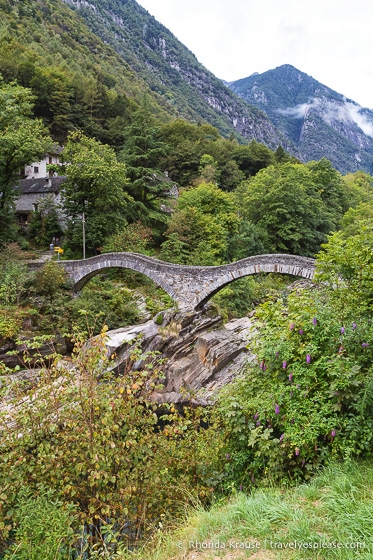 Alta Verzasca Bike is an easy 9 km trail that links together the traditional mountain villages of Brione and Sonogno in the upper Verzasca Valley.

The route is mostly flat but varied, with a mix of gravel roads, dirt trails, asphalt, and single track. Since there are sections with a lot of rocks protruding from the trail, a mountain bike with wide, sturdy tires is recommended.

The Alta Verzasca bike route crosses the Verzasca River several times, mostly over suspension bridges, but there is one makeshift crossing of boards laid across rocks in the water.

The approximate time to ride from Brione to Sonogno is 1 hr 25 minutes, at a leisurely pace. Since the route is linear, the return trip is on the same trail.

Since I was exploring the valley with a local, we loaded our bikes into his van and began the scenic drive towards Brione and the starting point of the Alta Verzasca bike trail.

On first glance, I knew this was going to be a wonderful bike ride. The trail crossed over the river and into a forest, the rocky path following the curves of the flowing water until it exited into an open pasture.

Mountains were on all sides and the first of many stone houses lining the trail appeared, prompting me to stop and take photos while gushing about how cute they were. I don’t even want to admit how many times I did this during the bike ride!

Carrying on through the field, I passed a few more rural settlements before crossing to the west side of the river. The trail briefly followed alongside the road before once again entering an open grassy area with traditional stone houses. What a peaceful and beautiful place to live!

Eventually the trail merged with the main road, passing through the village of Gerra Verzasca before crossing back to the east side of the river.

The remainder of the Alta Verzasca bike route was more of the same- small villages, rustic houses, gorgeous mountain scenery, and a few more river crossings.

The most unique thing I saw during my bike ride in the Verzasca Valley was the pulley systems leading to houses high on the mountainside. I wondered if they were still used for transporting goods or were remnants of the past.

I was so engrossed with the history and scenery in the Verzasca Valley, that before I knew it, I had arrived at Sonogno. Not quite ready to end my bike ride, I continued a short ways past the village on a paved trail to the Froda waterfall (La Froda).

The short walk up to the waterfall was a great addition to my bike ride in the Verzasca Valley. Tall and narrow, the waterfall looked so graceful cascading down the rock face. It was a lovely place to relax before heading back to Sonogno for lunch. 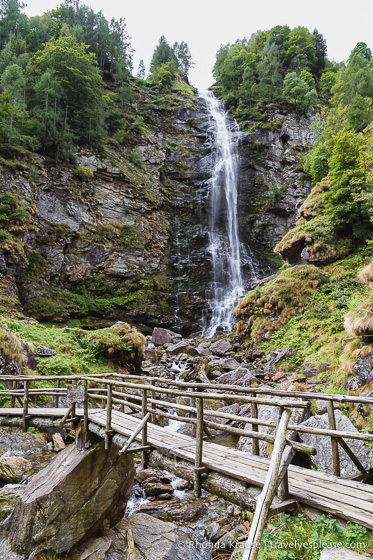 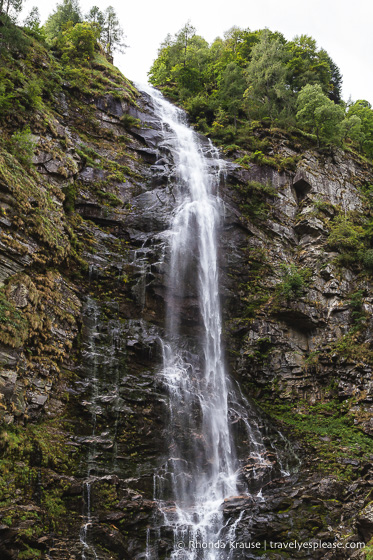 Sonogno is the last village in the Verzasca Valley and has more of the stone houses that are typical in Ticino.

For lunch, I went to a traditional restaurant called a grotto, named so because they were originally caves designed to store food. Grottos are popular in Ticino, so visiting one was a terrific (and delicious) way to sample the local culture.

Now with a belly full of cheese and gnocchi, I started to bike back to Brione, retracing the route I took earlier. I completed the trail much faster, since I wasn’t stopping to take pictures.

Once in Brione, I felt a wave of disappointment that my ride was over, since it was such a great bike route. But I knew there were plenty more attractions in the Verzasca Valley to look forward to during the drive back to Locarno.

More Places to See in the Verzasca Valley

While the highlight of my day trip to the Verzasca Valley was biking from Brione to Sonogno, there were two other sites that I enjoyed visiting.

One of the most photogenic spots in the Verzasca Valley is the Ponte dei Salti bridge in Lavertezzo.

This double-arched stone bridge crosses over the emerald green waters of the Verzasca, providing great views of the large, smooth rocks in the river and Beata Vergine degli Angeli church in the distance. 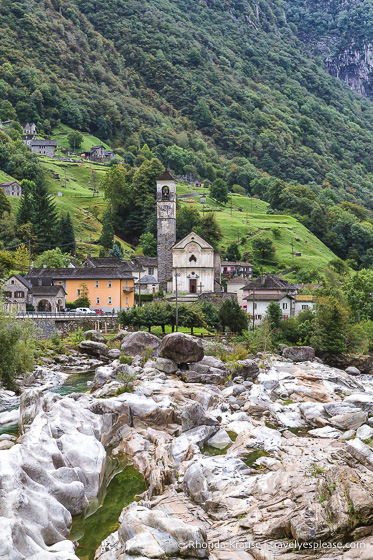 On warm days, this spot is very popular with people coming to sunbathe on the rocks, swim, or even jump from the bridge.

I loved the elegant design of Ponte dei Salti, especially how it used the river rocks for support. The bridge blended harmoniously with its surroundings, contributing to rather than detracting from the area’s natural beauty. 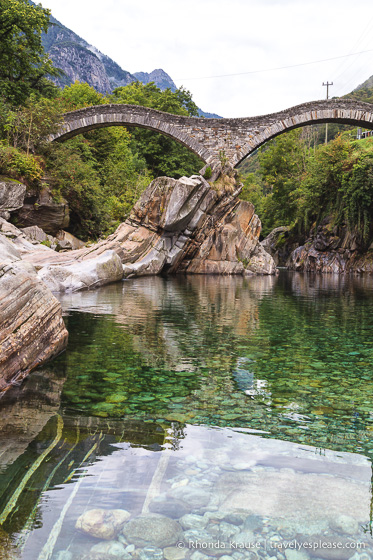 I was surprised to learn that Ponte dei Salti was not as old as it appears. The bridge was first built 400 years ago but was partially destroyed in 1868, so what stands today is a reconstruction from 1960.

The Contra Dam is known for being featured in the opening scene of the James Bond movie “Golden Eye”. Just like Bond did in the film, visitors can go bungee jumping from the dam, one of the tallest in Europe.

I wasn’t there to leap from the world’s highest stationary bungee station, but rather to admire Lago di Vogorno and the rest of the scenery at the start of the Verzasca Valley. However, I did have the guts to look over the edge and wow, was it a long drop! 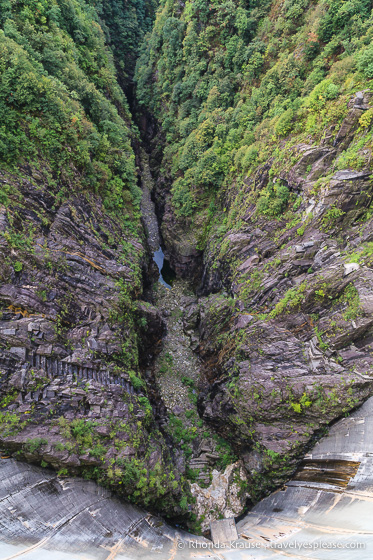 Looking down from Contra Dam

Final Thoughts About Cycling in the Verzasca Valley

I had a wonderful day biking in the Verzasca Valley. The Alta Verzasca route had a pleasing mix of beautiful scenery and historic architecture, while the trail itself was the perfect level of difficulty- easy but with enough rocky sections to keep it interesting.

My favourite part about the Alta Verzasca bike trail was that it felt remote and secluded, even though it wasn’t far from Locarno. There also was a bit of romance to it, with the pretty valley views and age-old stone houses. Biking in the Verzasca Valley, life felt simple, if only for one day.

The sole downside was I wished my bike ride was longer. Instead of driving, next time I would take the bus to Brione, cycle to Sonogno for lunch, then bike all the way back to Locarno, which is mostly downhill. This would have extended my ride, while also giving me freedom to stop at other interesting sites in the Verzasca Valley without having to pay for parking or be tied to a bus schedule. 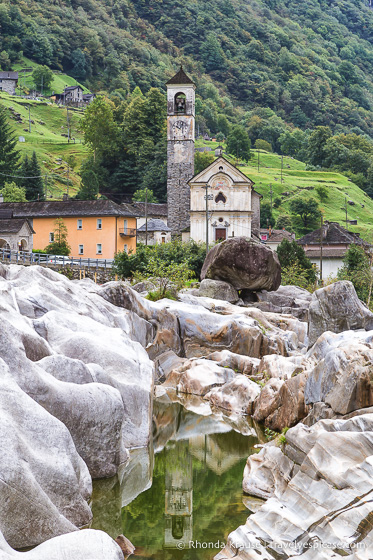 Tips for Alta Verzasca Bike and Visiting the Verzasca Valley

Location: The Verzasca Valley is located near the city of Locarno, in the canton of Ticino. The valley extends 25 km north of Lake Maggiore, framing the Verzasca River.

Getting There: From Locarno, you can drive or take a yellow PostBus (AutoPostale) to the Verzasca Valley.

Parking: There are 33 parking areas in the Verzasca Valley. You need to pay using a Verzasca Parking Card, which can be purchased at info points, kiosks, restaurants, tourist offices, and machines at parking lots. You can choose a card that is valid for one day or one week.

For your convenience, here is a list of hotels in Locarno. Please consider booking your Locarno accommodations through the included link. It costs nothing extra and helps support this website. Thank you!

I was hosted by Switzerland Tourism in order to bring you this story. As always, I speak only the truth and hosts have no editorial influence on articles.