One of my favourite days in Rome was the day I visited Palatine Hill. As I walked around this beautiful hill, past gardens and remnants of opulent palaces, I imagined how luxurious it must have been when it was ancient Rome’s most exclusive neighbourhood.

As Rome’s most central hill, the Palatine sits between Circo Massimo and the Roman Forum (which you can enjoy great views of from above). This convenient location, and its splendid views, made Palatine Hill “the place to live” in ancient Rome. Soon, Rome’s most powerful and wealthy residents built their homes here. Even Emperor Augustus called Palatine Hill home for his entire lifetime.

View of the Roman Forum

As time went on, the Palatine was eventually completely taken over by Rome’s emperors, each outdoing his predecessor by building increasingly lavish palaces. But Palatine Hill wouldn’t be the centre of affluence and privilege forever.

After Rome’s decline, Palatine Hill became neglected and its former glories fell in to ruin. In the Middle Ages, churches and castles were built over the remains. Changes continued during the Renaissance as members of wealthy families established gardens on the hill.

Much of Palatine Hill as it appears today remains covered by the ruins of Emperor Domitian’s palace. The excavated ruins and intriguing mythology about Palatine Hill make it one of the most interesting places to visit in Rome.

The Palatine is widely referred to as the mythical founding place of Rome. According to mythology, Palatine Hill was where twins Romulus and Remus were found by a female wolf that would keep them alive. A shepherd named Faustulus later discovered the infants, and took them home to be raised by his wife, Acca Larentia. 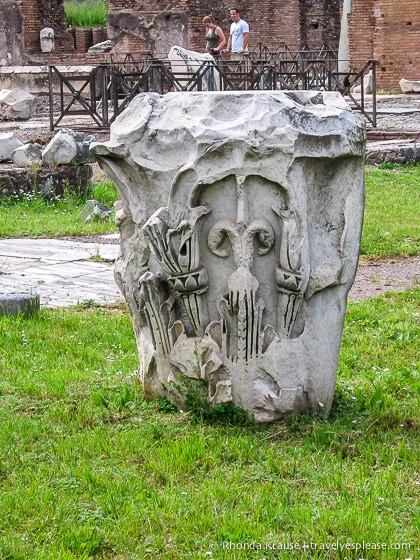 When Remus and Romulus were older, the boys decided to build a new city of their own on the banks of the Tiber river. As brothers sometimes do, they got into an argument about where to establish the new city. The disagreement had a violent end when Romulus killed his twin brother. Romulus then became the first king of Rome, the city named after himself, on April 21, 753 BC.

There’s obviously no proof to support this story, but archaeological evidence shows that people have lived on Palatine Hill since approximately 1000 BC.

What to See on Palatine Hill- The Palace of Domitian

While some of the ruins on Palatine Hill remain piles of rubble, much of Domitian’s palace has been well preserved, making it one of the best places to see on Palatine Hill.

The largest building on Palatine Hill is the Palace of Domitian. This vast complex served as the official residence of Roman Emperors for 300 years.

The Domus Flavia is the northwestern section and public wing of the Palace of Domitian. It was connected to the residential wing of the palace (Domus Augustana) and contained several large reception rooms for entertaining and ceremonies.

Inside the Domus Flavia there was a banquet hall, a room for judicial functions, a throne room, and a huge peristyle garden. The Domus Flavia was extravagantly decorated with columns, frescoes, friezes, fountains, and exotic marbles.

The Domus Augustana was the residential wing of the Palace of Domitian and contained the emperor’s private quarters.

It was built on two levels with rooms surrounding two peristyle gardens and a huge pool.

The Stadio (Stadium of Domitian)

The stadium on Palatine Hill was likely used by the emperors for private games and events, even though it was too small to accommodate chariots. It may have also just been used as a garden.

The stadium was the last section of Domitian’s palace to be built and many of the statues in the Palatine museum were originally displayed here.

Final Thoughts About My Visit to Palatine Hill

The Palace of Domitian was my favourite building on Palatine Hill because of the sheer size of its ruins. Even in partial disrepair, the palace looked so elegant and commanding.

While it was fantastic to get an up close look at Domitian’s Palace, it was the view from Circo Massimo below that really emphasized how large this structure actually was.

Even though I enjoyed my self guided-tour of Palatine Hill, I had to rely on the brief descriptions in my guidebook to make sense of the ruins. Maybe next time I would take a tour so that I could get more in-depth information about Palatine Hill.

Casa di Livia, a house owned by the wife of Augustus.

For quick and convenient access to Rome’s ancient monuments, here is a trusted site where you can buy digital tickets to Rome’s attractions and have them immediately delivered to your smartphone (no need to print).