How to Spend 3 Days in Havana- Our Itinerary

Havana is a lively capital city, full of charisma and, often times, crumbling charm. Friendly, colourful, and exuberant, Havana is worth a visit on any trip to Cuba. Days in Havana can be spent riding around in a 1950’s classic American car, admiring colonial architecture, visiting museums and wandering through the many historic plazas. Nights…

As we walked around Old Havana, I couldn’t help but look across the channel and wonder- “What is that giant stone wall?” It seemed like it went on forever, spanning almost the entire hill. The stone structure that had piqued my curiosity was actually a colossal colonial fortress, the largest in the Americas. Fortaleza de…

One of the things I loved most about Cuba was its vibrancy. It’s a bright and colourful country, a nice change from our dreary winters and beige houses here in Canada. Colours of Cuba In Havana, pops of colour breathe life into the worn, sometimes crumbling buildings. Classic cars, many with immaculate, glossy paint jobs,… 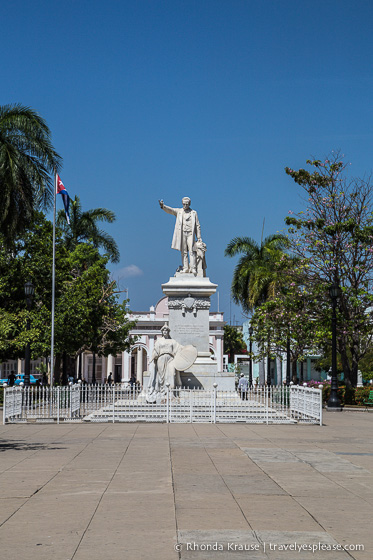 Cienfuegos was just a quick stop on our excursion to Trinidad, but as soon as I stepped off the bus, I was wishing we could stay at least a few hours. A UNESCO World Heritage Site, Cienfuegos was lovingly nicknamed in colonial times the “Pearl of the South”. The seaside city still retains much of…

What to Expect on Your First Trip to Cuba: A First Time Visitor’s Guide

Cuba is a fascinating and unique country, with enough diversity to please all types of travellers. History buffs will feel as though time has stood still in Cuba’s charming colonial towns, rich with colour and culture. Nature lovers and adventure seekers will enjoy hiking among the jungle covered mountains and lush valleys. Those looking for…

During our stay in Varadero, we booked an excursion that took us to Trinidad and the Escambray Mountains, where we spent the night in Topes de Collantes nature reserve park. The next morning, our tour took us through the jungle covered mountains and down into Guanayara National Park, where we enjoyed an easy hike past…

Exploring the Plazas of Old Havana

La Habana Vieja, or Old Havana, is the historic heart of Cuba’s capital city and the largest colonial centre in Latin America. Full of colour and personality, it’s a mix of historic buildings, museums, galleries, churches and lively plazas. Old Havana is where most of the tourists to Havana spend their time. It’s full of…

Trinidad is the place I was most looking forward to visiting in Cuba. I had heard so many great things about this delightful, small town, and lucky for me, it easily lived up to my high expectations. Walking around Trinidad, I couldn’t help but smile. The colourful, colonial architecture gives the town a bright, cheerful…

A Night Out at the Tropicana Havana

Our cab heads down a broad, tree lined avenue into Miramar, Havana’s most elegant district. We zip past stately villas, housing embassies and institutions, on our way to Cuba’s, maybe even the world’s, most famous nightclub- the Tropicana Havana. Turning off the main road, our taxi slowly pulls into a lush tropical forest. The fluorescent…

Photo of the Week: Varadero Sunset

by Rhonda KrausePosted in Caribbean, Cuba, Photo of the Week, Travel Photos

Varadero’s white sandy beach was the perfect place to enjoy a quiet sunset, the evening breeze shaping the blue water into small, curling waves. Varadero is Cuba’s top resort community and occupies the 19 km long Peninsula de Hicacos. If you would like to experience more than just Cuba’s beaches, the resorts at Varadero offer…

Hustled and Hassled in Havana

After an eventful first night in Havana, I woke up the next day excited to begin exploring the city. I couldn’t wait to ride in a classic car, admire the architecture, and experience the local culture. After breakfast we hopped in a beautiful 1951 Chev and had the driver take us to Plaza de la…

A Strange Introduction to Havana

“I hope we come away from Havana with some good stories,” I eagerly said to Mike as our bus pulled away from the airport. I was excited to be visiting Cuba for the first time, a country I was very curious about. I was especially enthusiastic about spending 3 days in Havana, the lively capital…