As we made our way over to the dirt covered track in Ancient Olympia, my heart started to beat a little faster. Could I do this? Was I ready? Or would I be left behind in the dust?

The Greek sun mercilessly beating down on me, I started to feel flush as I stepped up to the starting line. Sprinting has never been my strong suit.

Marina, our guide, drops her arm and we bolt, running our way down the ancient sprint track. You can hear the sand slipping, flinging up behind us with each stride we take. Everyone is determined, wanting to win the coveted olive branch wreath.

One by one, the women cross the finish line. I’m not surprised to find myself finishing in the middle of the pack. I struggle to catch my breath as a wide grin comes across my face.

Wow! I just ran in the original Olympic stadium! I thought with pride.

We gathered in the shade of an olive tree as Marina ceremoniously placed the olive branch wreath, crowning the heads of the two of the winners. We applauded and cheered as the two champions smiled proudly, raising their arms in victory.

This may not have been the real Olympics, but the energy surrounding us was thrilling. We got a small taste of what athletes, thousands of years ago, must have felt when they competed here in Olympia at the world’s biggest sporting event.

Long before Olympia was known as the birthplace of the Olympics, it was a place of worship. The Great Goddess Rhea, “mother of gods”, was worshiped here until the classical era, when her son Zeus, superseded her in becoming the subject of worship.

The first official Olympic Games were declared in 776 BC by King Iphitos of Elis, held in honour of Zeus. Every four years in August, around the time of the first full moon, Greek males would compete in the five day athletic festival. Everyone except slaves and women were allowed to attend, spectating events such as chariot racing, wrestling and discus throwing.

The games were held until 393 AD, when they were banned by Emperor Theodosius I in his quest to eliminate pagan festivals. Years later, in 426 AD, Theodosius II continued to enforce the ban, ordering destruction of the temples at Olympia.

Olympia suffered more devastation after earthquakes in the mid-6th century and repeated floods. It was finally abandoned early in the 7th century and eventually became buried under layers of mud. Olympia was rediscovered in 1766 but the first excavations were not carried out until 1829.

Exploring the Archaeological Site at Olympia

The excavated site of Ancient Olympia is a mix of temples, public buildings and priests’ dwellings, all set in a wooded valley at the foot of the Kronos Hill. There also is an excellent museum which houses some impressive finds. I recommend starting your visit at the museum as it helps with visualizing what the ancient buildings once looked like.

Here are a few sites you will see on a tour of Ancient Olympia!

My favourite part of the museum at Ancient Olympia was the reassembled figures that decorated the pediments of the Temple of Zeus. Even in their incomplete state, they are spectacular and tell an exciting story. The western pediment has Apollo as the central figure and shows the Centaurs abducting the Lapith women. The eastern pediment has Zeus as its central figure and depicts the chariot race between Pelops and Oinomaos.

A masterpiece of ancient Greek art is the statue of Hermes of Praxiteles, carrying the infant Dionysos to Mt. Nysa. This Parian marble creation stands 2.1 metres high and is dated to 330 BC.

Don’t miss the statue of Nike of Paionios. The winged woman, cut from Parian marble, dates back to 421 BC. Although the wings are now broken and the monument is incomplete, you still get the impression of Nike gloriously descending from Olympus.

The museum also has many ancient battle helmets and other armour on display, along with a collection of beautifully crafted votive offerings found on site. 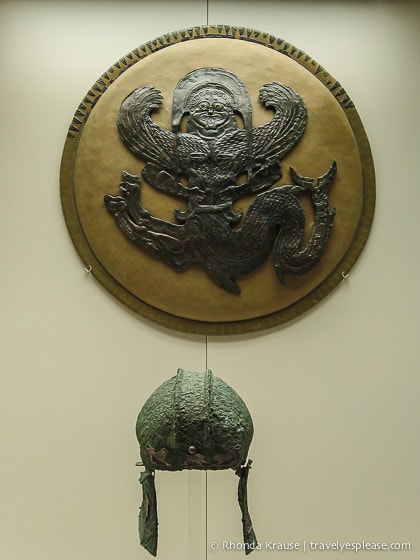 The Gymnasium and Palaestra

Upon entering the archaeological site, the path will take you along the length of the gymnasium and to the Palaestra, or wrestling school.

The Palaestra was built in the 3rd century BC as part of the gymnasium and was where athletes would practice boxing, jumping and wrestling. The open court was covered with fine sand and was surrounded by a Doric colonnade of 72 columns.

Continuing past the gymnasium is Pheidias’ workshop, where the great sculptor crafted a colossal statue of Zeus. This ivory and gold monument was one of the Seven Wonders of the Ancient World.

Across the way from Pheidias’ workshop is the Altis (Sacred Precinct of Zeus). Its most important building was the Temple of Zeus, a massive 5th century Doric temple, the biggest in the Peloponnese. The temple once housed the statue of Zeus, before it was removed by Theodosius II to Constantinople.

Today, all the columns lay fallen to the ground, except one which has been erected by archaeologists.

East of the Altis is the stadium where the Olympic Games were held. Entering through a stone archway, you are met with a 212 metre long sprint track. It’s amazing that the original start and finish lines still survive, along with the judges’ seats. The stadium could accommodate about 40,000 spectators, who watched the games from the grassy slope of the hill, as there were no permanent seats.

Standing at the foot of Kronos Hill, in the northwest corner of the Altis, is the Temple of Hera. It’s one of the oldest monumental temples in Greece and very influential in the history of Greek architecture. Built towards the end of the 7th century, it was one of the first examples of the Doric order on mainland Greece.

The Temple of Hera is special today because it is where the Olympic torch is lit, the flame then being carried by runners to the host city of the current Olympic games.

The spot where the Olympic torch is ignited.

West of the Temple of Hera is the Philippeion, a circular building built by Philip of Macedon to commemorate his victory in the Battle of of Khaironeia (338 BC). The building housed statues of Philip and his family and was the only structure in the Altis dedicated to a human. 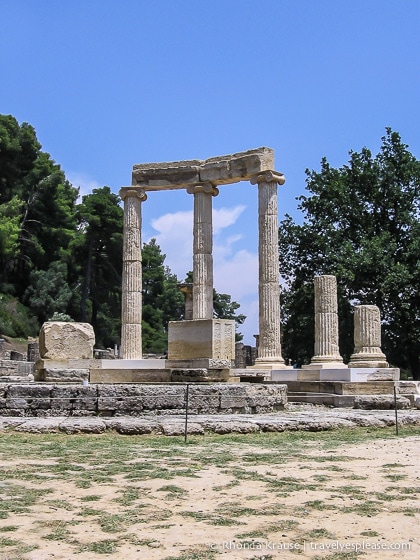 Final Thoughts About my Tour of Ancient Olympia

I loved visiting Ancient Olympia! There’s something really special about walking around a place that has made a significant contribution to today’s society. The Olympic Games are such a proud moment for athletes and the countries they represent. To think that all started here, thousands of years ago is amazing. It’s a wonderful tradition to have carried on, succeeding in bringing our world together.

For me, the thrill of running on the original Olympic track still hasn’t worn off, nearly seven years after the fact!

Here is a trusted site where you can book tours to Olympia and other ancient sites in Greece. These are a few interesting ones I’ve picked out.

For your convenience, here is a list of hotels in Olympia. Please consider booking your Olympia accommodations through the included link. It costs nothing extra and helps support this website. Thank you!