This is Part Two of our series on Bavaria’s fairy tale castles. In Part One, we explored the small resort village of Hohenschwangau then toured Hohenschwangau Castle and its beautiful courtyard. Next, we take a look at Bavaria’s most famous castle, Neuschwanstein.

One of the world’s most iconic palaces, Neuschwanstein Castle has captivated well over 61 million visitors with its romantic, storybook appearance and tales of madness surrounding its lonely creator, “Mad” King Ludwig II.

There wasn’t a place I was more excited to see on our honeymoon than Neuschwanstein Castle. We speed-walked up the steep road, out of breath, heart pounding, calf muscles burning, but too excited to slow down.

When we finally reached the top I still was out of breath, but it wasn’t because of the trek up the hill. I was spellbound by the fairy tale scene in front of me- a stone masterpiece surrounded by thick, mystical fog.

About Neuschwanstein Castle- Architecture and History

Ludwig’s five-story palace is so enchanting that it has been featured in many movies and even inspired the design of Disney’s Sleeping Beauty Castle. Numerous towers, turrets, balconies, and pinnacles come together to form the highly stylistic castle, an architectural fashion known as castle romanticism.

King Ludwig II ordered Neuschwanstein Castle to be built in 1869, paid for entirely from his own personal fortune and loans. Ludwig’s design drew on inspiration from the Wartburg in Saxony and the operas of Richard Wagner, specifically Tannhäuser and Lohengrin.

The interior of the Neuschwanstein Castle is just as magnificent as the exterior. The formal and residential rooms are decorated with pictures and symbols from German prehistory, but it’s the concert hall, or “Singers’ Room”, that makes the biggest impression.

No detail was overlooked in the Singers’ Room, which takes up the entire length of the fourth floor. It was elaborate and extravagant- every piece of wall was covered in vibrant, rich decoration. It almost killed me not to be able to take a picture of it! 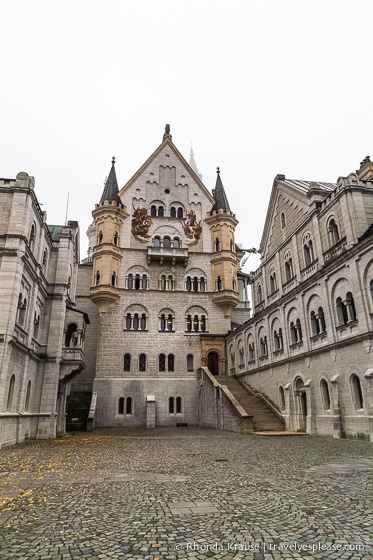 As impressive as Neuschwanstein Castle is, it’s sad to think the Ludwig II didn’t get to enjoy his beloved refuge for very long. He lived in the unfinished palace for only 172 days before he mysteriously died in Lake Starnberger. At the time of Ludwig’s II death in 1886, just 14 rooms in the castle were finished. Had the castle been completed, there would have been more than 200 rooms. 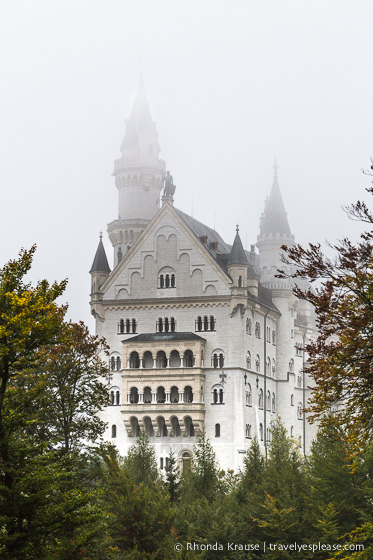 Ludwig II never intended his castle to be accessible to the public, but just six weeks after his death it was opened to paying visitors, generating a large amount of income for the Bavarian royal family.

A model of Neuschwanstein Castle.

After our short tour of Neuschwanstein Castle we walked the scenic path over to the Marienbrücke, an iron bridge offering fantastic views of the castle (when it’s not covered in fog!) The 92 metre high bridge crosses a gorge near the Pöllatschlucht waterfall, a sight to see in itself!

As captivating as Neuschwanstein Castle was from the outside, the tour of the interior wasn’t very memorable. Sure, there were some very gorgeous rooms, but a lot of unfinished rooms as well. What we saw was such a small portion of the castle and before we knew it, the tour was over.

Since the tour felt rushed and the groups were quite large, it was hard to truly savour the castle experience. I would have much preferred to wander through on our own, but unfortunately that’s not allowed.

Even though the tour of Neuschwanstein Castle wasn’t ideal, we still were glad we went inside. The Singers’ Room alone made it worthwhile for me. Had we not gone inside, I would have always wondered what was behind those elegant stone walls.

In spite of the mediocre tour, the striking architecture and romantic location make Neuschwanstein Castle one of the best places to visit in Bavaria.

Visit Part One of our series on Bavaria’s fairytale castles- Hohenschwangau Castle. You may also enjoy this featured photo of Neuschwanstein Castle.

Location: Neuschwanstein Castle is located in the small village of Hohenschwangau in southwest Bavaria, Germany.

Parking: There are four paid parking lots in Hohenschwangau. Parking is allowed from 8:00 am- 8:00 pm.

Reaching the Castle: Walking uphill to Neuschwanstein takes about 20-30 minutes from the ticket centre. Alternatively, there is a bus that runs from the village of Hohenschwangau to Neuschwanstein, or you can pay for a horse-drawn carriage ride up to the castle. The castle is still a short 10-15 minute walk from the bus/carriage drop off point.

Tours and Tickets for Neuschwanstein Castle: The interior of the castle can only be visited as part of a guided tour. Tickets can be purchased at the ticket centre in Hohenschwangau and you will be allotted a specific tour time. The ticket centre is open 8:00 am- 5:30 pm in the spring and summer months. In the fall and winter, it’s open from 9:00 am- 3:30 pm.

*Information was correct at the time of publishing but can change without notice. Please confirm costs and times directly with service providers.

Tours to Neuschwanstein Castle From Munich

Here is a trusted site where you can book tours to Neuschwanstein Castle as a day trip from Munich.

Accommodations can be found in Hohenschwangau, at the base of the castles, or nearby in the beautiful little town of Füssen (about 4 kms away). For your convenience, here is a list of hotels in Hohenschwangau and hotels in Füssen. Please consider booking your accommodations through the included link. It costs you nothing extra and helps support this website. Thank you!

Photo of the Week: Leaning Tower of Pisa
How to Spend 3 Days in Budapest- Our Itinerary
Photo of the Week: Ponte Vecchio, Florence
Solo Travel in Ireland- 7 Reasons Ireland is a Great Place to Travel Alone
746 Shares
Share145
Tweet156
Pin444
Share1
Flip