Walking the Fortifications of Québec City

by Rhonda KrausePosted in Canada, Quebec

Québec City has many things to brag about, but what makes it truly unique is the fortification wall that surrounds the historic district of Old Québec.

As the only fortified city north of Mexico, Québec has a long and prominent military history. From its founding in 1608 by French explorer Samuel de Champlain, to its conquer by British forces in 1759, Québec City has seen many battles and sieges.

To defend against such attacks, a wall was built around Québec City in 1690. This original wall included 11 towers but was hastily built, having to be replaced three years later. The city’s current wall began to take shape in 1745, permanently surrounding the city. 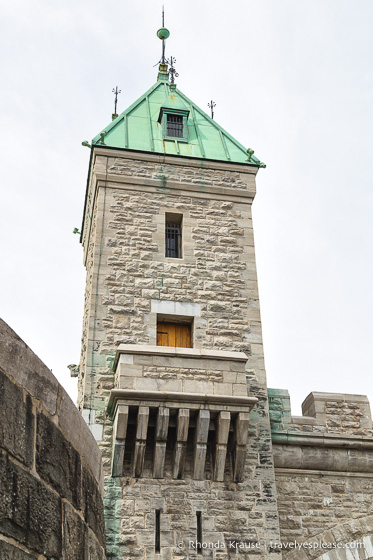 Walking the Fortifications of Québec

Walking the Fortifications of Québec is a great way to immerse yourself in the city’s military history. The entire 4.6 km wall surrounding Old Québec can be walked either on top or on a path next to it, and passes by Quebec City’s most significant historic sites (and is a National Historic Site itself).

Along the way you’ll discover stories of big names in Canadian history- Cartier, Champlain, Frontenac, Wolf and Montcalm- as you pass by canons, loopholes, barracks, gates, battlefields and fortresses.

My Self-Guided Tour of the Fortifications of Québec

A central place to start a tour of the Fortifications of Québec is at Dufferin Terrace, near the monument to Samuel de Champlain. From there, take the staircase down and cross the street into Montmorency Park where you can begin walking Québec City’s wall.

Montmorency Park has served many different purposes over the years including being a military site and meeting place of the Legislature of the United Province of Canada.

It is now home to a few statues and memorials, including one for Sir Georges-Étienne Cartier, a founding Father of Confederation.

While the views over Petit-Champlain (the Lower Town) were nice, it was the canons pointing towards the St. Lawrence River that put me in the mood to discover the military history that shaped Québec City.

After Montmorency Park there weren’t any notable sites, just great views, until I arrived at Artillery Park.

This National Historic Site has over 250 years of military history. A strategic location overlooking both the St. Charles River and the plateau west of the city, Artillery Park served as barracks for French and English troops before becoming the site of Canada’s first ammunition factory.

I briefly wandered around the Barracks Sector, viewing the Officer’s Quarters and the Dauphine Redoubt, before making my way to the Gun Carriage Warehouse and Arsenal Foundry. The foundry is now a museum, the highlight of which is a scale model of Québec City built between 1806 and 1808.

From Artillery Park you can climb up to Porte St-Jean (St. John Gate) to continue the walk along the wall.

From the top you can enjoy views of Rue Saint-Jean, a trendy street of cafes, restaurants and shops, and Place D’Youville, a public square that is transformed into an outdoor skating rink during the winter.

The section of wall between Porte St-Jean and Port-Kent is a popular place for people to sit and relax with friends on a sunny day. I too decided to take a break here to appreciate the military heritage of Old Québec.

Continuing my walk, I followed the wall to Porte St-Louis and then on to the Citadel.

Constructed by the British atop of Cape Diamond between 1820 and 1850, this star-shaped fortress is the largest of its kind in North America.

I was curious what was behind those stone walls so decided to take a guided tour of the Citadel, even though it was a bit pricey at $16. A tour is the only way you can visit the Citadelle de Québec, as it’s still an active garrison of the Royal 22nd Regiment.

Over the next hour our guide walked us around the grounds, taking us inside two buildings- the French powder magazine and the military prison. Both buildings were like a small museum, with different military related artifacts on display.

Some other notable buildings we viewed from the outside were the officers’ mess hall, the Governor General’s secondary official residence, the Ball House and Observatory, and the Memorial Chapel which contains the Book of Remembrance listing all the Regiment’s men and women who’ve fallen in the line of duty. 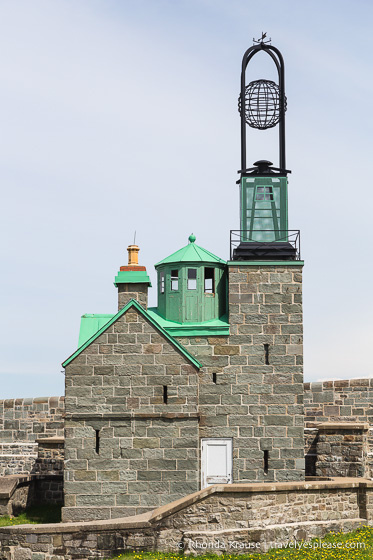 During my tour I was surprised to find out that Québec City’s only authentic gate is at the Citadel. Dalhousie Gate is the only one that hasn’t been rebuilt to accommodate traffic.

Today the Citadel’s functions are mostly symbolic with military ceremonies such as the Changing of the Guard held on the parade grounds in the summer.

After my tour of the Citadel, I took a few moments to relax on the Plains of Abraham across from the fortress.

This grassy area was the location of the 1759 battle between the British invading army of General Wolf, and defending French troops of General Montcalm.

The Battle of the Plains of Abraham was a pivotal moment in the Seven Years’ War, as it led to the surrender of Québec to the British. The French, having lost control of New France, handed over Canada to the British at the end of the war in 1763.

From the Plains of Abraham, I followed the Governor’s Promenade along the Citadel and Cape Diamond back down to Dufferin Terrace, where I started my walking tour of the Fortifications of Québec.

This tree-lined boardwalk was built to commemorate Québec City’s 350th anniversary. When Prime Minister Diefenbaker inaugurated the Governor’s Walkway in 1960, he declared that a visit to Québec City was “like a pilgrimage to the cradle of our nation.”

To end my walk I visited one last place of historic significance, the Saint-Louis Forts and Châteaux archaeological site.

On the same site in 1647, Governor Charles Huault de Montmagny built the first chateau, a one-story stone structure. Construction on the second chateau began in 1694 by Frontenac, but wasn’t completed until 1723.

After two centuries as an administrative centre and residence for governors of New France, and later British Governors General, the chateau eventually succumbed to fire in 1834 and was never rebuilt.

I thought this archaeological site was quite fascinating and nicely put together in terms of interpretive displays. The walls are well preserved and numerous artifacts have been found revealing what daily life was like for the French and British governors. I was especially impressed by what remains of the kitchen area.

Since I don’t like to read a lot of signs, I was glad that Parks Canada staff were on hand to share stories and answer my questions.

Final Thoughts About the Fortifications of Québec

Walking the Fortifications of Québec was the highlight of my 2 days in Québec City. The historic sites taught me so much about Québec City’s military roots, plus there were plenty of great views to enjoy along the way!

If you don’t have time to walk the entire wall, I recommend at least doing the section between the Citadel and Artillery Park, as this was my favourite part of the wall.

Québec’s motto, “I Remember”, inside the Citadel.

Tips for Walking the Fortifications of Québec

For your convenience, here is a list of hotels in Québec City. Please consider booking your Québec City accommodations through the included link. It costs nothing extra and helps support this website. Thank you!

Photo of the Week: Romantic Elk Island Sunset
Snowshoeing in Jasper- Our First Experience and Why You Should Try it Too!
Dinosaur Provincial Park, Alberta- One of Canada's Most Unique Landscapes
Visiting Val-Jalbert- An Authentic 1920s Company Town in Quebec
932 Shares
Share49
Tweet
Pin881
Share2
Flip