Île de la Cité- An Island in the Heart of Paris

by Rhonda KrausePosted in Europe, France

Paris’ soul is on a small island in the Seine. The Île de la Cité is where Paris was born- a modest settlement called Lutetia, established by the Parisi Gauls, that expanded over 2,000 years to become one of the world’s most beloved cities.

Paris’ oldest bridge, the pont Neuf, links the mainland to Île de la Cité where you will find a former medieval palace turned prison, a tiny church with dazzling stained glass, and a world-famous cathedral.

What to See on Île de la Cité- Points of Interest

Some of my favourite tourist attractions in Paris are on Île de la Cité. Of course, there’s the famous Notre-Dame Cathedral, but it was Sainte-Chapelle that made my jaw-drop. I also enjoyed visiting the Conciergerie and learning about the dark side of the French Revolution.

The main attraction on Île de la Cité is Notre-Dame Cathedral. The gothic church, dating back to the mid-fourteenth century, is an architectural gem, widely considered to be one of the finest examples of French Gothic architecture. It was one of the first buildings in the world to incorporate flying buttresses as a means of supporting exterior walls.

Many small statues, all individually crafted, can be seen around the exterior of the building. My favourite are the gargoyles. You can get an up close view of the famous gargoyles, which were designed as water spouts, by climbing 387 steps to the top of the cathedral.

Inside the cathedral you can view three beautiful rose windows and the Treasury is home to some of Catholicism’s most important relics, including the Crown of Thorns.

UPDATE: Notre-Dame Cathedral is currently closed after a devastating fire in April 2019.

This large, intimidating building is easily seen from the Right Bank of the Seine. The Conciergerie was once a palace, the seat of the medieval Kings of France.

The Conciergerie was converted to a prison at the end of the 14th century and was increasingly used during the French Revolution. It soon became a symbol of the ten month Reign of Terror. It was the final stop for over 2,700 people who were executed by guillotine. Famous prisoners include Marie Antoinette, Georges Danton and the poet André Chénier. Inside you can see some of the old prison cells, including a mock version of Marie Antoinette’s. 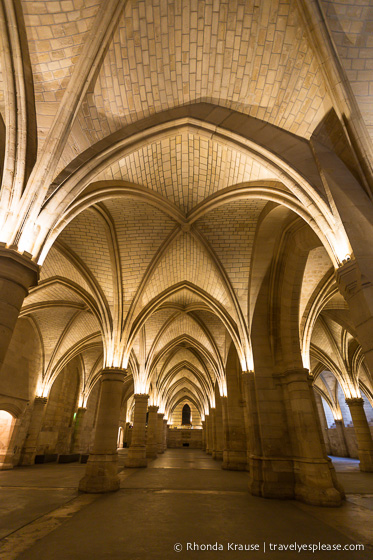 Tucked away on the western end of the island, between the Congiergerie and the Palais de Justice, lies the tiny church of Sainte-Chapelle. Made almost entirely from stained glass, the church will make your jaw drop. 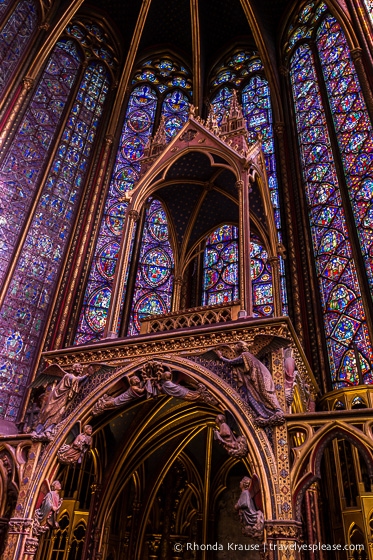 The pinks, purples and blues of 15 huge 13th century windows glisten beautifully as the sunlight shines through the intricate designs. Over 1,100 scenes of Christian stories are depicted in the windows. Even though one complete side of the chapel was covered up for restoration work, it still was one of the most magnificent churches I have ever been in. I felt like I was inside a jewel box!

We loved strolling around and visiting the historic attractions on Île de la Cité. For a such a small island, there’s a lot of important places to see on Île de la Cité. This is definitely a must-see area on your first trip to Paris!

For quick and convenient access to the Île de la Cité attractions, here are some trusted links where you can buy advance, mobile tickets to the sites mentioned in this post. Digital ticket delivery is instant and you can show your phone at the ticket holders entrance- no need to print your tickets.

Purchases made through the included links earn us a small commission, at no extra cost to you, and help support this website. Thank you!

For your convenience, here is a list of hotels located near the Île de la Cité. Please consider booking your Paris accommodations through the included link. It costs nothing extra, and helps support this website. Thank you!