As I was leaving for my first trip to Ireland, I felt more relaxed than I usually do before visiting a new country. The excited anxiety that I normally experience was replaced by confident anticipation.

Since I was going to be travelling solo for my first trip to Ireland, I made sure to do plenty of research before hand. I wanted to arrive feeling self-assured and prepared for my 2 week road trip in Ireland.

Luckily, most everything I had read or heard about Ireland was overwhelmingly positive. As I boarded the plane to Dublin, I didn’t feel a twinge of worry about travelling in Ireland for the first time.

What to Expect on Your First Trip to Ireland

After my first trip to Ireland, I can tell you to expect a warm welcome, gorgeous scenery, interesting ruins, fun and friendly locals, a relaxed atmosphere, and a lot of rain.

Ireland is a place where you can fill your days with outdoor adventures and hours of sightseeing, but it’ll also tempt you to slow down and soak up the natural beauty and inviting culture.

Not only was Ireland a great place for solo travel, it was very easy to travel around. I didn’t experience any culture shock, since Irish culture has such a global reach, especially here in Canada where many citizens are of Irish descent.

Even though what I experienced in Ireland was not too much different from home, there are a few things to know when planning your first trip to Ireland.

I hope this guide, based on my personal experience and observations, answers any questions about travelling to Ireland for the first time, helping your own trip go as smoothly as mine did!

Ring of Kerry, near Moll’s Gap

Renting a Car in Ireland

Near the Gap of Dunloe, Killarney

Stone church at Inishmore, one of the Aran Islands.

Other Tips & Observations on my First Trip to Ireland

Final Thoughts About my First Trip to Ireland

I had a fantastic time during my first trip to Ireland! It was everything I thought, and hoped, it would be.

Even though a visit to Ireland can involve a lot of driving, it’s a journey that’s easily savoured. I couldn’t get enough of the green hills and craggy coast, and was content to lose track of time while exploring ruins and hiking in nature.

For a small island, there’s an incredible amount of wonderful sights. I definitely didn’t experience everything I wanted to. I guess I’ll have to plan another trip to Ireland one day! 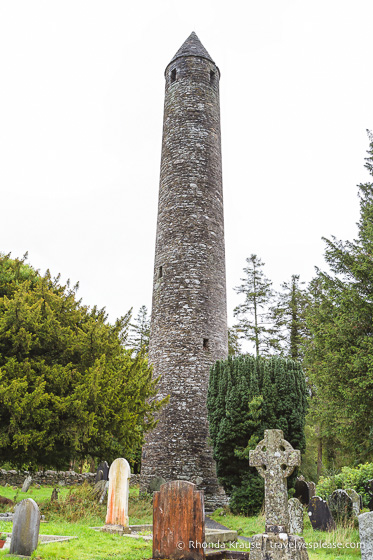 Where to Visit on Your First Trip to Ireland

To help you decide where to visit on your first trip to Ireland, here is a video of highlights from my two week road trip.

Resources to Help Plan Your First Trip to Ireland

Here are some resources to help you plan your first trip to Ireland.

For your convenience, here is a list of hotels and B&Bs in Ireland. Please consider booking your Ireland accommodations through the included link. It costs nothing extra and helps support this website. Thank you!

Here is a trusted site that has a large selection of tours and tickets for activities in Ireland. You can book everything from day trips out of Dublin, full-day regional tours, walking tours, airport transfers, pub crawls, food tours, and multi-day tours.

Products I Use and Recommend for a Trip to Ireland

Waterproof outerwear is a must for a trip to Ireland. I was so glad I had waterproof pants and waterproof shoes that were sturdy enough for short hikes, yet lightweight enough to wear all day.

2 Weeks in Ireland- My Road Trip Itinerary
Swiss Travel Pass Guide- How to Buy and Use the Swiss Travel Pass
Travel Reviews- Which to Trust, Which to Ignore?
Day Trip to Inishmore- The Largest of Ireland's Aran Islands
12.9K Shares
Share191
Tweet49
Pin12.6K
Share5
Flip